Everybody’s Business: Mentor helped lift him to the top 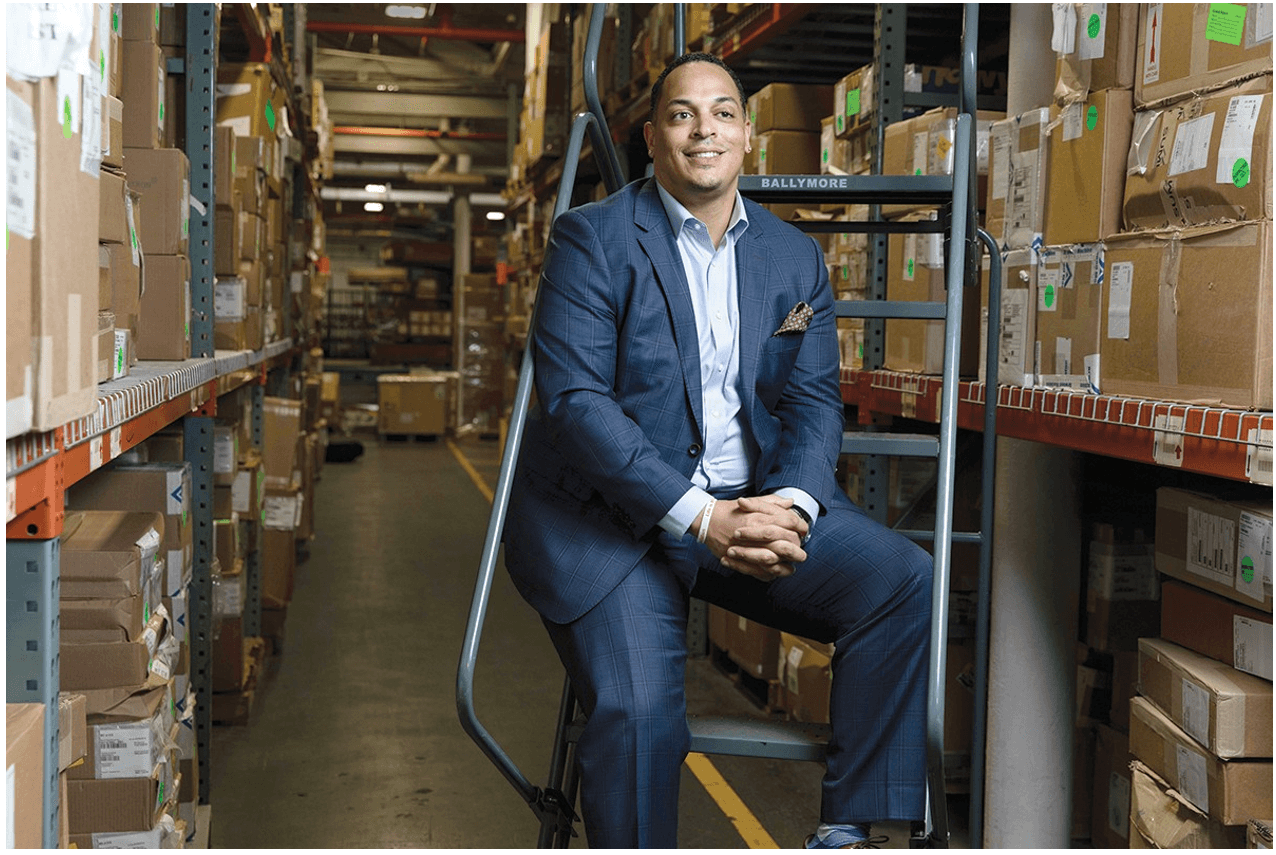 CLIMBING THE LADDER: Junior Jabbie started as an intern at Banneker Supply Chain Solutions Inc. in North Smithfield in 2005. Now he is the company’s top executive. / PBN PHOTO/RUPERT WHITELEY

(Editor’s note: This is the sixth installment in a monthly series speaking with minority business owners and leaders. Each will be asked their views on minority-business conditions in the state and for ways to improve those businesses’ chances for success.).

Junior Jabbie didn’t have a long-term career plan when he started an internship at Banneker Supply Chain Solutions Inc. as a Bryant University student in 2005.

“My thoughts initially were to make sure I had a steady job to pay for my incidentals,” Jabbie recalled recently. Soon he found Banneker offered something more: The “liberty to explore, ask questions, be myself and be rewarded for hard work and effort,” he said.

The rewards certainly have come.

In 2018, Jabbie became CEO and president of the North Smithfield-based provider of warehousing and supply-chain management and logistics – a rise to the top of the multimillion-dollar company that he credits to its late founder, Cheryl W. Snead.

Jabbie, who is Black and a native of Silver Spring, Md., had enrolled at Bryant, participating in the school’s football program while studying for a degree in business management.

The Banneker internship led to an introduction to Snead, who became his mentor.

Snead had her own set of accomplishments, including becoming the first African American woman to graduate from the University of Massachusetts Amherst with a degree in mechanical engineering. She went on to work as an engineer for General Electric Co. before earning a master’s degree in business from Purdue University.

Later, she managed a small machine shop in Rhode Island and, in 1991, launched Banneker.

“Cheryl and her husband, Roland, who was a visionary, served as a catalyst –  and I adopted the concept of being ready, and quickly advanced to the executive leadership team,” Jabbie said.

After graduation, Jabbie was hired full time as sales and marketing manager. Two years later, he was promoted to operations, where he worked for three years.

Jabbie said the Sneads were impressed with his can-do attitude, and they made it their mission to groom him for leading the company.

In 2018, Snead died at age 59 of complications from a surgical procedure. Before the surgery, she had named Jabbie interim CEO and president, a title that   became permanent after her death.

Jabbie said he feels that Snead is still with him at Banneker, which now employs 68 worldwide. “I’m merely a custodian of this business,” he said.

His leadership role includes providing inspiration for other minorities. Jabbie said he speaks about four times a year to various groups and is a guest lecturer at Bryant.

“I’m just a kid who got an opportunity,” he said. “My dream of owning Banneker was an incredible milestone, but my dreams and ambitions are bigger.”

Do you believe racism is keeping minorities from starting businesses in the Ocean State or succeeding when they do?

I believe institutional racism and white supremacy have infected every vein and artery in American Rhode Island, despite its small size and origins rooted in tolerance and protective care of God, has not been immune to that infection. And while I think significant progress has been made on many fronts, there is much work to do.

How dependent is your business on the support of other minority groups? Is that a sustainable business model?

All companies depend on business groups and coalitions in some That continues to be critical as global commerce and technology continue to bridge us all together. National/international minority business groups [such as] the National Minority Supplier Development Council have been as important to our growth and development as have local organizations [such as] the Rhode Island Black Business Association. I do not think these groups are part of our business model, but rather help us execute our business model and provide access to resources and networks to grow minority-owned businesses.

What one thing could Rhode Island do to boost the odds for minority- owned business success?

I think a low-hanging fruit the state could easily do to help level the playing field, versus boosting the odds, is to adhere to the 10% state requirement for minority-business purchases/participation. For many years and many administrations, this requirement has not been enforced or compliance has been achieved by ways that may hit a specific goal but do not do anything to help scale and grow minority businesses. Rhode Island should increase the minimum required spend to 30% of all contracted dollars. The state needs to set higher ambitions, not succumb to lower expectations.

Have you had to turn to an entity other than a bank for a loan? Do you believe the state’s lending institutions generally treat minorities fairly?

Thankfully, we have a great relationship with our bank, The Washington Trust But there have been times in the past where access to capital was limited to only a few nontraditional lenders with much higher interest rates. Cheryl Snead did tell me stories of how traditional lenders did not want to lend her money to start Banneker in the early 1990s. One of the organizations that did help her was the Opportunities Industrialization Center of Rhode Island.

If another minority entrepreneur asked you where they could turn for support for their business, where would you direct them?

If any entrepreneur, minority or not, asked for my help, I would start by listening to what their challenges are and then directing them to people and organizations that have experience and resources to help with their set of issues. At the end of the day, it is really all about people helping people for the common